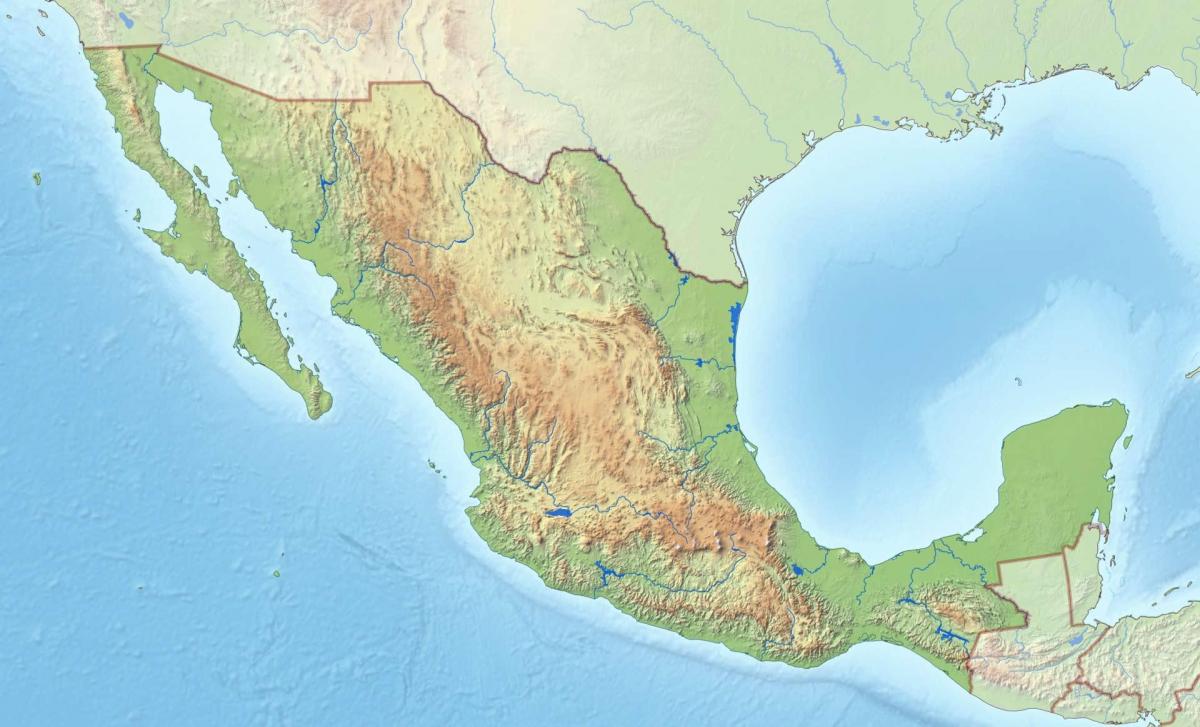 From its farthest land points, Mexico is a little over 3,200 km (2,000 mi) in length as its mentioned in Mexico physical map. Mexico is bounded to the north by the United States (specifically, from west to east, by California, Arizona, New Mexico, and Texas), to the west and south by the Pacific Ocean, to the east by the Gulf of Mexico, and to the southeast by Belize, Guatemala, and the Caribbean Sea.

Almost all of Mexico is on the North American Plate, with small parts of the Baja California Peninsula in the northwest on the Pacific and Cocos Plates as you can see in Mexico physical map. Some geographers include the portion east of the Isthmus of Tehuantepec including the Yucatán Peninsula within North America. This portion includes the five states of Campeche, Chiapas, Tabasco, Quintana Roo, and Yucatán, representing 12.1% of the country total physical area. Alternatively, the Trans-Mexican Volcanic Belt may be said to delimit the region physiographically on the north. 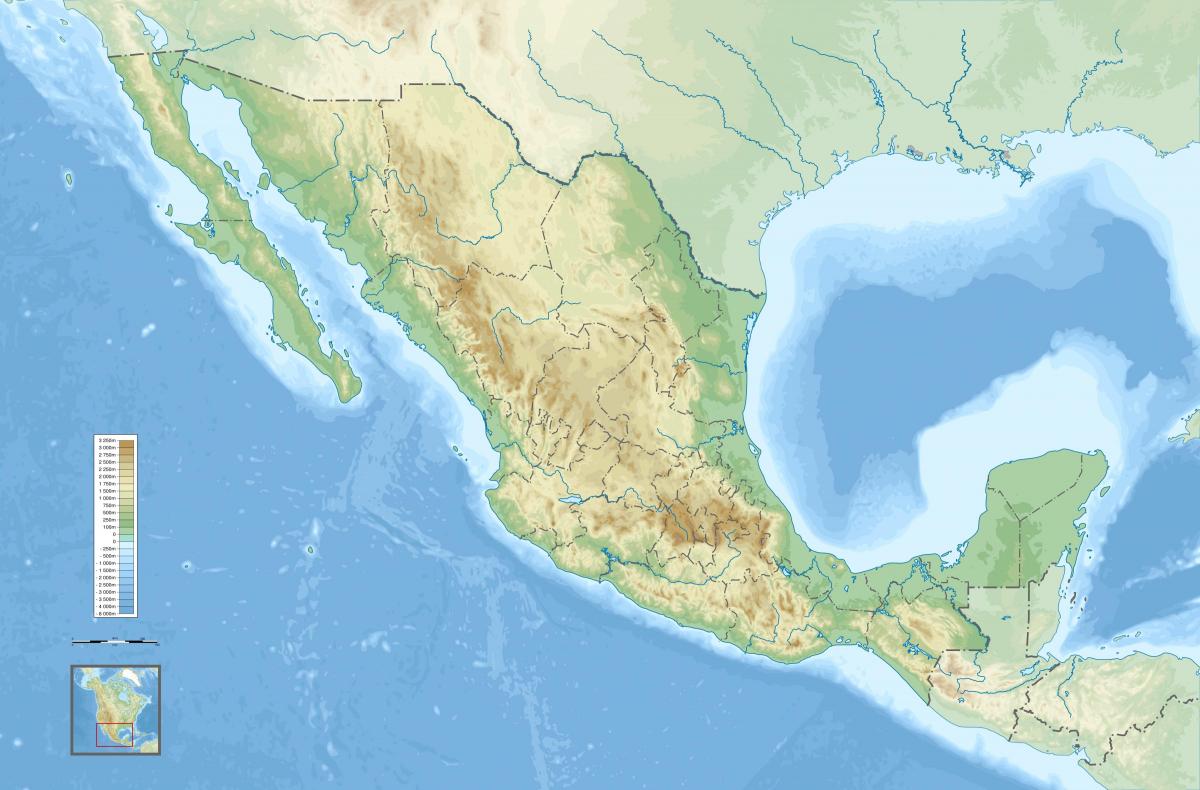 Mexico topography is characterized by a diverse range of landscapes including coastal plains, temperate highlands, and extensive mountain ranges which climb to elevations of over 10,000 feet above sea level as its mentioned in Mexico topographic map. This diversity creates a variety of different climate zones across the country.

Mexico dominant geographic feature is the great highland central plateau, which occupies most of the width of the country, extending from the US border to the Isthmus of Tehuantepec. It averages 1,219 m (4,000 ft) in elevation in the north to over 2,438 m (8,000 ft) in the central part of the country as you can see in Mexico topographic map. There are no important inland waterways. Except for the Rio Grande (known as the Río Bravo del Norte in Mexico), which extends for about 2,100 km (1,300 m) of the boundary with the US, and the Papaloapan, an important source of waterpower, the other rivers are short; they are the Lerma, Santiago, Usumacinta (part of the boundary with Guatemala), Grijalva, Balsas, Pánuco, and the Soto la Marina. The largest lake in Mexico is Lake Chapala, in Jalisco State, covering about 1,686 sq km (651 sq mi).

Something of the topography and geology of Mexico should be known by all who would understand the geography of the North American Continent, for in Mexico are reproduced and culminate all the characteristic topographic features of the West. A study of the topography of Mexico is a study of her Sierra Madre as you can see in Mexico topographic map. Of these mother mountains there are two, the Sierra Madre of the East and the Sierra Madre of the West, and between them lies a great, elevated and irregularly eroded plain, the central basin of Mexico. 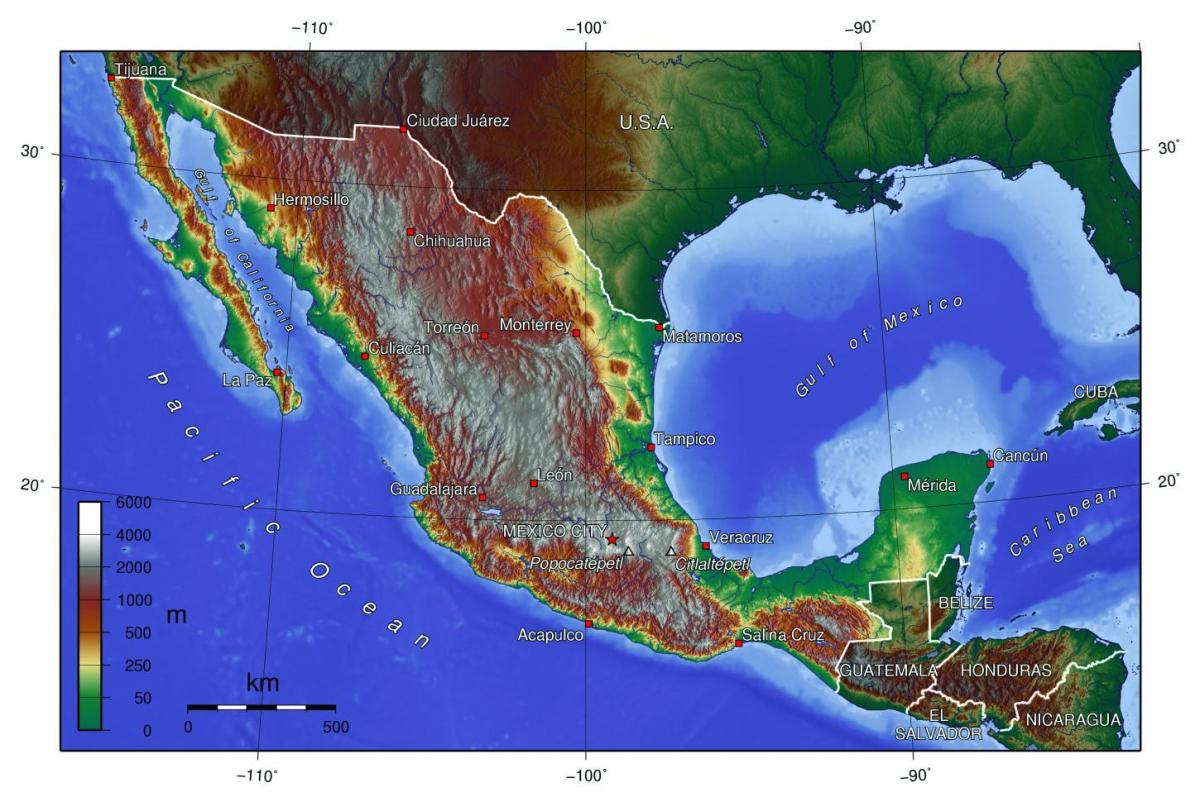 The Pico de Orizaba, or Citlaltépetl (from Nahuatl citlal(in) = star, and tepētl = mountain), is a stratovolcano, the highest mountain in Mexico and the third highest in North America. It rises 5,636 metres (18,491 elevation ft) above sea level in the eastern end of the Trans-Mexican Volcanic Belt, on the border between the states of Veracruz and Puebla as its mentioned in Mexico elevation map. The volcano is currently dormant but not extinct with the last eruption taking place during the 19th century.

Laguna Salada is a vast dry lake(sometimes wet - sometimes dry) in the Sonoran Desert of Baja California, 30 km (19 mi) southwest of Mexicali. It is shaped somewhat like an hour-glass, long and skinny and very narrow at the center. During times of little rain the lakebed becomes dry and driving on it in most any type of vehicle is a real treat. During times of significant rain the lagoon can fill completely with water, leaving the road along its west bank as the only means of traversing the area. Flanked by the Sierra de Los Cucapah and the Sierra de Juárez as you can see in Mexico elevation map, the lake is approximately 60 km (37 mi) long and 17 km (11 mi) at its widest elevation point. 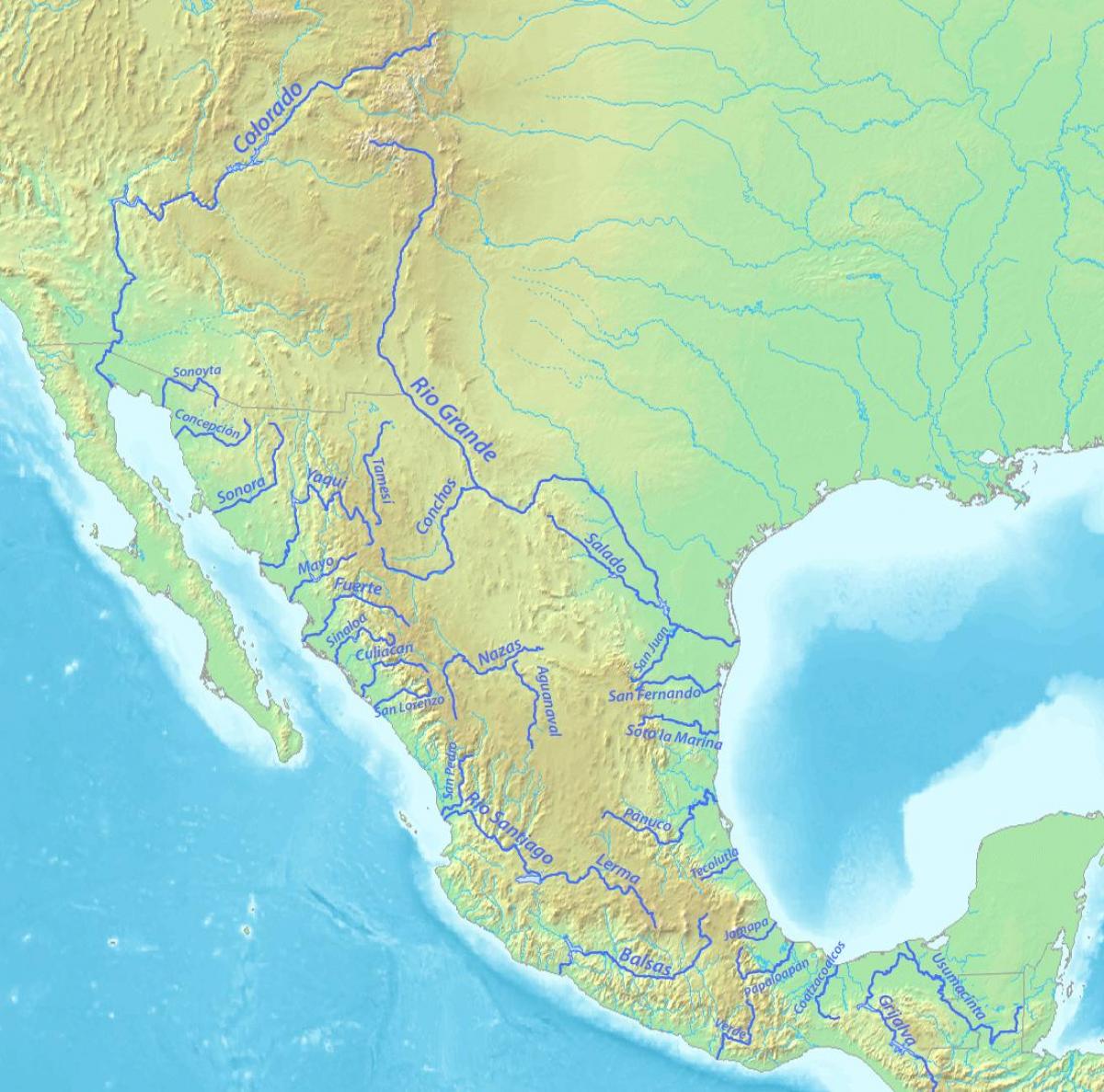 The rivers in Mexico map shows the principal rivers with their names of Mexico. The rivers map of Mexico will allow you to find the main rivers which flow in and through Mexico in Americas. The Mexico rivers map is downloadable in PDF, printable and free.

Mexico has nearly 150 rivers as its shown in Mexico rivers map, two-thirds of which empty into the Pacific Ocean and the remainder of which flow into the Gulf of Mexico or the Caribbean Sea. Despite this apparent abundance of water, water volume is unevenly distributed throughout the country. Indeed, five rivers—the Usumacinta, Grijalva, Papaloapán, Coatzacoalcos, and Pánuco--account for 52 % of Mexico average annual volume of surface water.

All five rivers flow into the Gulf of Mexico; only the Río Pánuco is outside southeastern Mexico, which contains approximately 15 % of national territory and 12 % of the national population as its mentioned in Mexico rivers map. In contrast, northern and central Mexico, with 47 % of the national area and almost 60 % of Mexico population, have less than 10 % of the country water resources.

Mexican rivers are not well suited for navigation and thus have had only a minor influence on Mexico historical development. Their most important use has been as sources of irrigation water and hydroelectric power. Mexico annual flow of river water (roughly 410 km3) is about 25% more than the St. Lawrence River, but 25% less than the Mississippi River as its shown in Mexico rivers map. Most of this flow is in southern Mexico which gets by far the most rainfall. Mexico dams have an installed capacity of about 11 gigawatts of electricity, roughly one fifth of the country total generating capacity; they do not operate at full capacity, so they only generate about one eighth of total electricity. 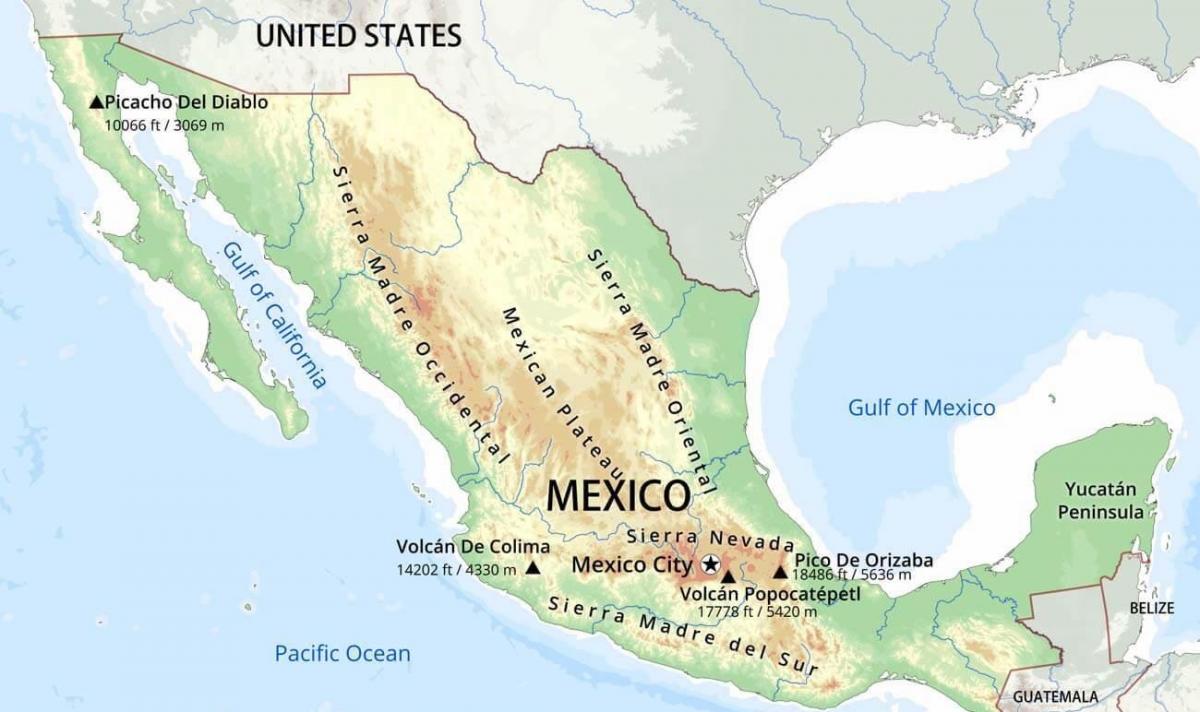 The Peninsular Ranges, cuts across the landscape of the northern half of Mexico. A southern extension of the California coastal ranges that parallel California's coast, the Mexican portion of the Peninsular Ranges extends from the United States border to the southern tip of the Baja California Peninsula, a distance of 1,430 kilometers as its shown in Mexico mountains map. Peaks in the California system range in altitude from 2,200 meters in the north to only 250 meters near La Paz in the south.

Narrow lowlands are found on the Pacific Ocean and the Gulf of California sides of the mountains.The Cordillera Neovolcánica is a belt 900 kilometers long and 130 kilometers wide, extending from the Pacific Ocean to the Gulf of Mexico as its mentioned in Mexico mountains map. The Cordillera Neovolcánica begins at the Río Grande de Santiago and continues south to Colima, where it turns east along the nineteenth parallel to the central portion of the state of Veracruz. The region is distinguished by considerable seismic activity and contains Mexico highest volcanic peaks. This range contains three peaks exceeding 5,000 meters: Pico de Orizaba (Citlaltépetl)--the third highest mountain in North America—and Popocatépetl and Iztaccíhuatl near Mexico City.

Several important mountain ranges dominate the landscape of southern and southeastern Mexico as you can see in Mexico mountains map. The Sierra Madre del Sur extends 1,200 kilometers along Mexico southern coast from the southwestern part of the Cordillera Neovolcánica to the nearly flat isthmus of Tehuantepec. Mountains in this range average 2,000 meters in elevation. The range averages 100 kilometers wide, but widens to 150 kilometers in the state of Oaxaca. 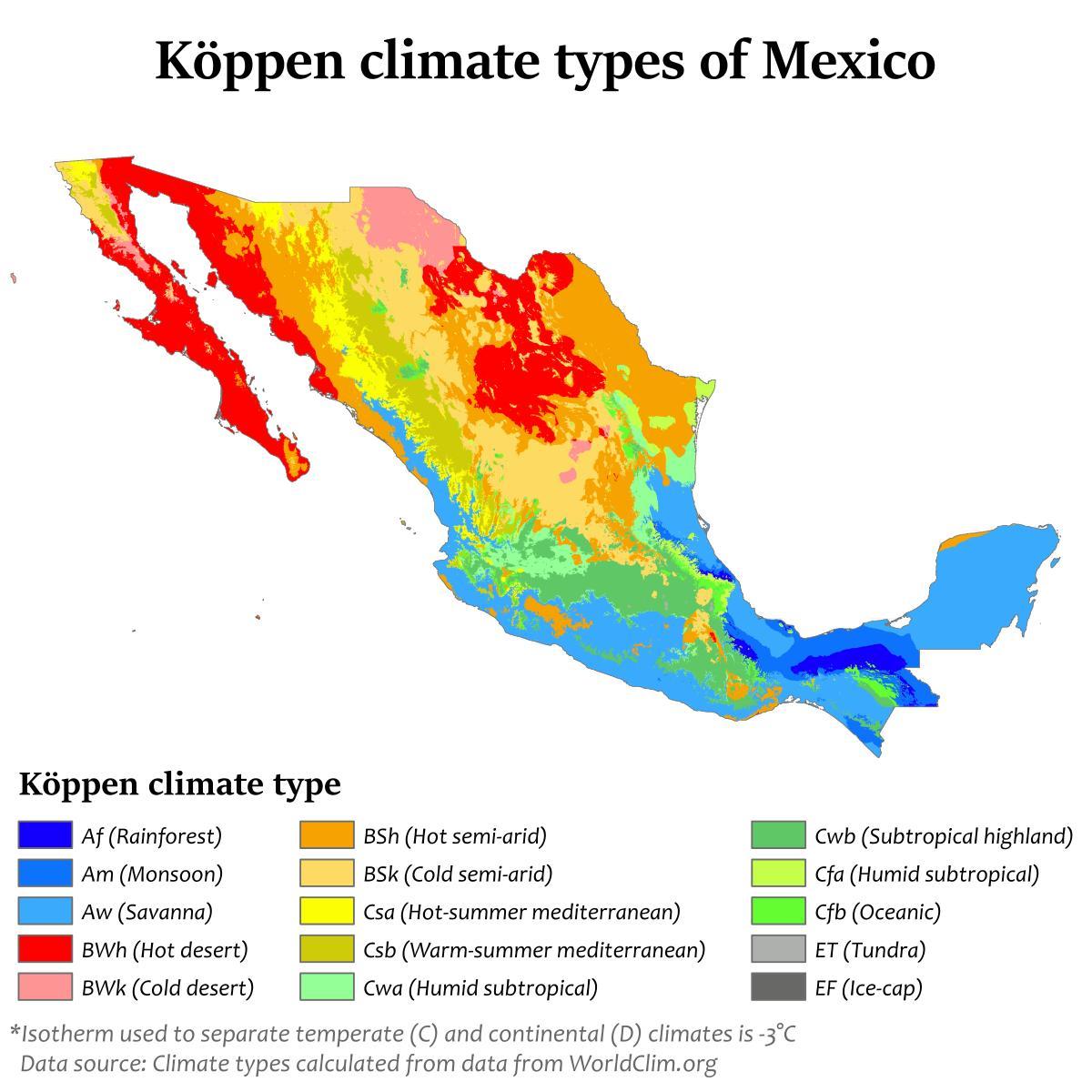 The Climate in Mexico varies according to its geology.Along the coast (on both sides of the country) it is hot andhumid, insufferably so in the late spring. The climate inMexico City, which is sited at a height of 2,300 metersabove ocean level as its shown in Mexico climate map, is significantly more direct. MexicoCity has wonderful summers and gentle winters, with ayearly normal temperature of 18 degrees Celsius.Additionally, northern Mexico gets exceptionally hotduring the summer with sudden violent storms in theafternoon, with heavy rain and hail; also an isolatedtornado can occur with this storm.

Temperatures here remain high throughout the year, with only a 5 °C (9 °F) difference between winter and summer median temperatures as you can see in Mexico climate map. Although low-lying areas north of the twentieth-fourth parallel are hot and humid during the summer, they generally have lower yearly temperature averages (from 20 to 24 °C / 68 to 75.2 °F) because of more moderate conditions during the winter.