You can find on this page the Mexico region map to print and to download in PDF. The Mexico political map presents states, regions, provinces and surrounding areas of Mexico in Americas.
The Five regions of Mexico as its mentioned in Mexico region map are: (1) Metromex; (2) Mexamerica in the north; (3) South Mexico; (4) New Spain and Club Mex. 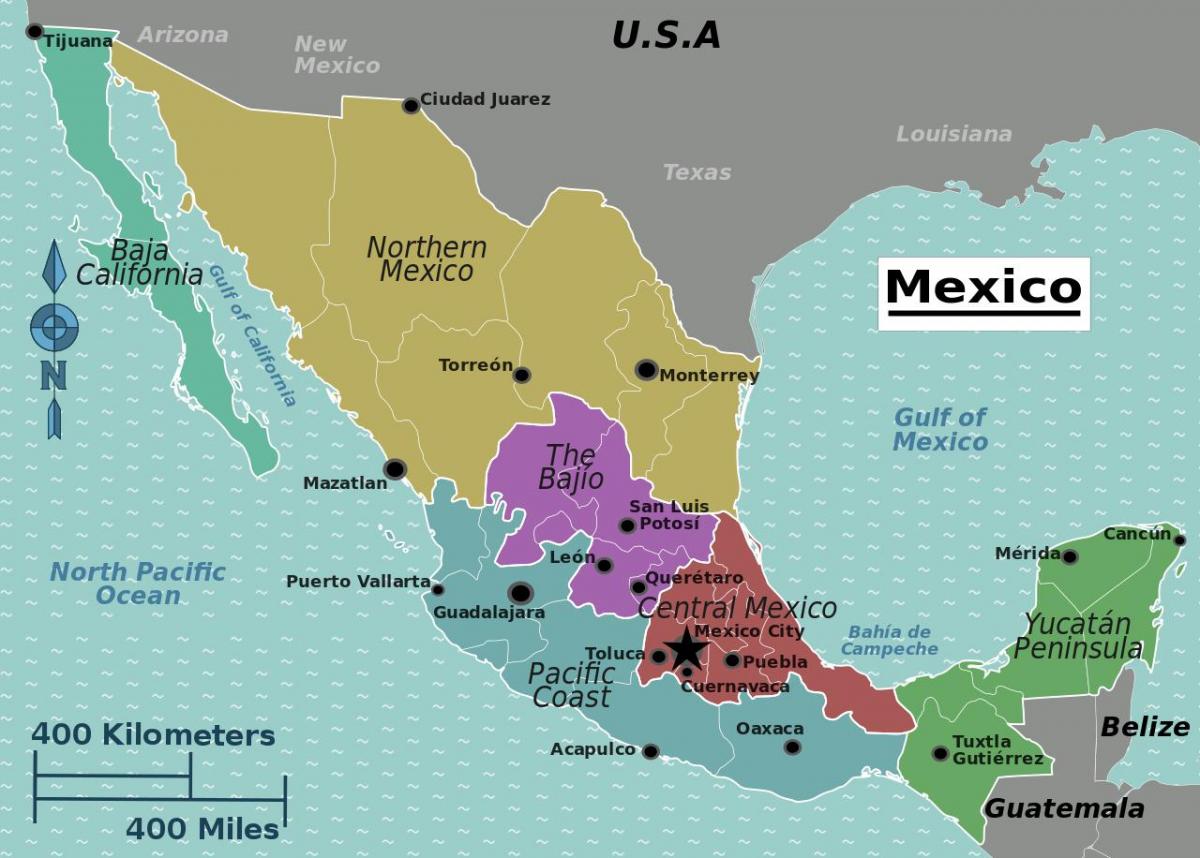 In the Spring 1987 issue of Focus (pp. 2-9) published by the American Geographical Society. Louis Casagrande described what he called the "Five regions of Mexico". In the article he explains the growing importance of Mexico to the United States and the extreme lack of knowledge most Americans have of their southern neighbor. The Five regions as you can see in Mexico regions map are: (1) Metromex comprising Mexico City, the federal district and the surrounding state of Mexico; (2) Mexamerica in the north; (3) South Mexico along Mexico southern boundary; (4) New Spain in the colonial core across the center of the country; and (5) Club Mex, tourist enclaves along the Mexican coasts.

Metromex region is comprised of the Mexico City, the Federal District , and the 45 municipalities of the state of Mexico including industrial corridors radiating out from the city to the northeast to Pachuca, to the northwest to Queretaro, to the east to Puebla, and to the south to Cuernavaca. Mexamerica region comprises the northern half of Mexico and extends into the United States to include Los Angeles, Albuquerque, and San Antonio as its shown in Mexico regions map. Its major Mexican cities include Tijuana, Ciudad Juarez, Chihuahua, Monterrey, and Nuevo Laredo. New Spain region is the densely populated [density] colonial center of Mexico. This is "traditional" Mexico. Once the center of the Mesoamerican culture hearth, now Mestizo culture predominates [ethnicity] with the Spanish language and the traditional Mexican diet of maize, beans, and chilies.

The southern part of Mexico as its mentioned in Mexico regions map is poor, agricultural, and Amerindian [Amerindian Languages]. Its population of about 15 million is over half Amerindian most of whom are subsistence farmers. There are few large cities with the population dispersed in small towns and agricultural villages [population]. Club Mex region is a new nation in Mexico made up of resort enclaves. These include the converted port towns of Acapulco, Mazatlan, and Manzanillo; the former fishing villages of Puerto Vallarta, Puerto Escondido, and Cozumel; and the new tourist centers of Cancun and Ixtapa.

The Politics of Mexico take place in a framework of a federal presidential representative democratic republic whose government is based on a congressional system, whereby the president of Mexico is both head of state and head of government, and of a multi-party system. The federal government represents the United Mexican States and is divided into three branches as you can see in Mexico political map: executive, legislative and judicial, as established by the Political Constitution of the United Mexican States, published in 1917. The constituent states of the federation must also have a republican form of government based on a congressional system as established by their respective constitutions.

The United Mexican States (Spanish: Estados Unidos Mexicanos) is a federal republic formed by 32 federal entities (Spanish: entidades federativas) (31 states and 1 federal district) as you can see in Mexico political map. According to the Constitution of 1917, the states of the federation are free and sovereign. Each state has its own congress and constitution, while the Federal District has only limited autonomy with a local Congress and government.

Mexico has a multi-party political system, which means that there are more than two dominant political parties. The politics of Mexico are dominated by three political parties as its shown in Mexico political map: National Action Party (PAN), the Party of the Democratic Revolution (PRD) and Institutional Revolutionary Party (PRI). Other smaller political parties survive in isolation or by forming local coalitions with any of the big three. 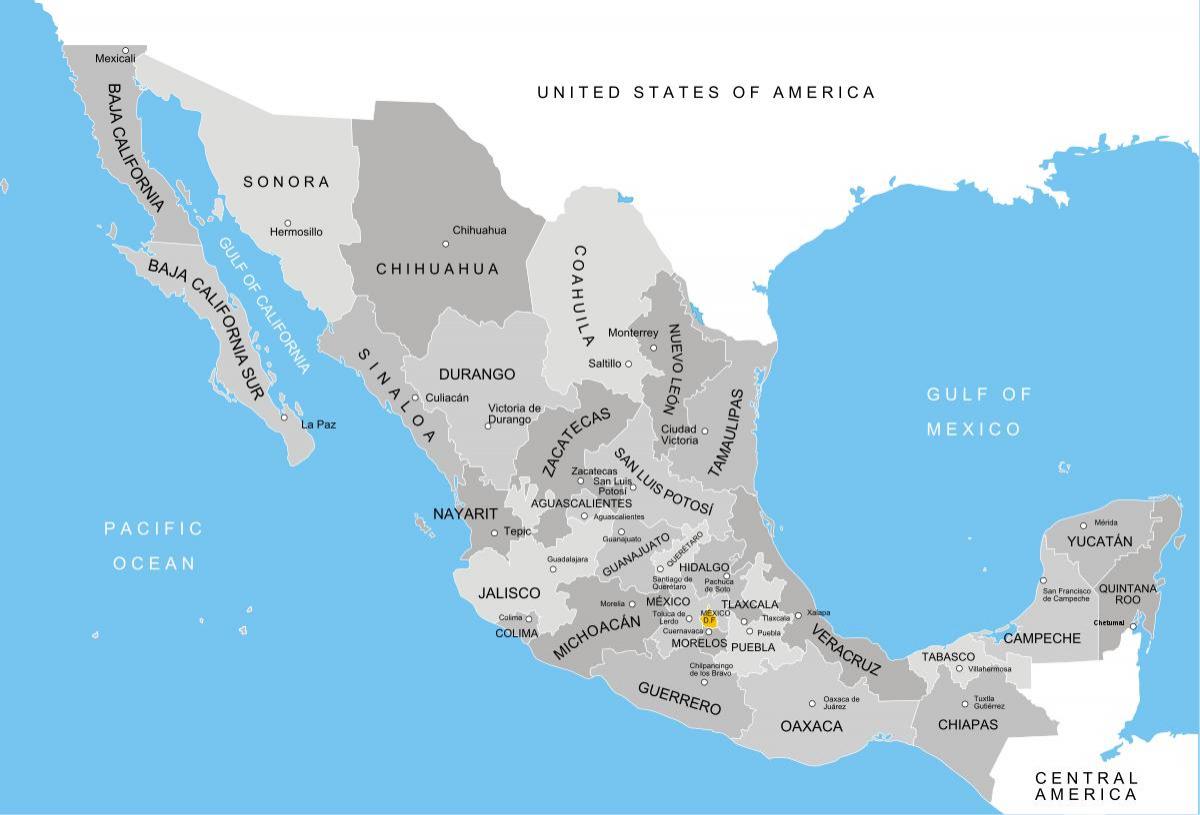 The United Mexican States are a federation of thirty-one free and sovereign states as its mentioned in Mexico states map, which form a union that exercises a degree of jurisdiction over the Federal District and other territories. Each state has its own constitution, congress, and a judiciary, and its citizens elect by direct voting a governor for a six-year term, and representatives to their respective unicameral state congresses for three-year terms.

The Federal District of Mexico is a special political division that belongs to the federation as a whole and not to a particular state, and as such, has more limited local rule than the nation states. The states as you can see in Mexico states map are divided into municipalities, the smallest administrative political entity in the country, governed by a mayor or municipal president (Presidente municipal), elected by its residents by plurality.